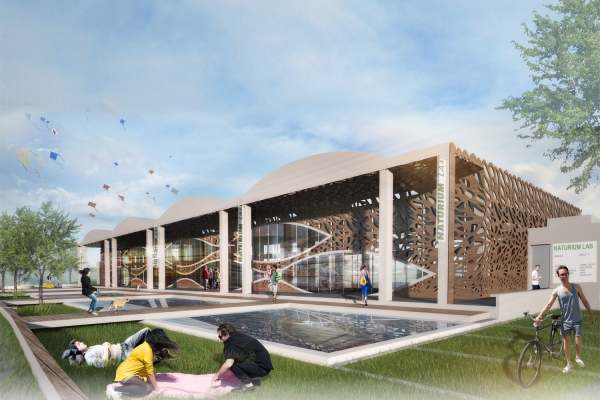 DESCRIPTION: Given the national importance of the public space issues and the opportunity they present in promoting the city of Soverato, the new project aims to find a solution for city areas which will hopefully enhance the quality of urban life. On the other hand, it aims to establish a strong link with the dynamics of contemporary society through functional solutions that meet the needs of the day and night activities of the neighborhood. The building attempts to revive an entire urban area through a series of coordinated actions, implementing the best design solution that combines the diverse needs of rationalization of traffic and the revitalization of commercial, industrial and cultural sites. The goal is to create a pole of aggregation that can revitalize the waterfront through the localization of Soverato’s new architecture. The neglected industrial area is currently poorly integrated with the urban context and requires a general reconfiguration, rendering it qualitatively recognizable in the urban landscape. The idea of the project is to create an iconic building into a focal point between the waterfront and the city. The project harnesses the power of the unique location; the Multipurpose Center is designed so that the building becomes a true urban park, with the fluid line taken by the morphology of the ground and the motion of the sea. A series of open-air amphitheaters overlook the waterfront and take advantage of the wonderful sea as a backdrop of Soverato. These forms allow the fluid to pass through the multi-purpose center in a different way. In this way the architecture is revealed from time to time, unexpectedly offering panoramic views. The aim of the project is to build a new center with space for shopping and culture that will also become a venue for large and small cultural events and commercial activities of the City of Soverato.

DESCRIPTION: Our primary purpose is to respond the request to design a building for Oslo of extraordinary architectural and Historical significance and to create a public resource for Oslo that would benefit the community in which it is located, creating a world class cultural facility in Norway. The project proposal is to generate a new synthetic landscape through the understanding and integration ofits systems. It will be a landmark, a new recognizable structure; a sign of the national museum history able to attract at the same time both international artists and private collectors to support the institution, increasing international interest in Norwegian culture in a way to create a new economic and tourist resource for Oslo. The National Museum is not just a place where norwegian culture is displayed, but mainly an artificial path, a Museum_scape, a stroll through the history of a culture and a place; it is a natural place closely related to the culture of the norwegian people, a place for interaction and gathering, a place for learning and studing . The new museum will substantially contribute to the cultural offerings of the city, and will make an important statement about the future development of Oslo: -Ecological: the rooftop as an urban resource; the museum building as a “living organism” with bioclimatic features. -Historical: the renovation and connection to the historical preexistences in order to restore historical value and identity to the place. -Cultural: the museum intended as a pathway that brings into dialogue art and ecological issues. -Social: the museum as a community space with a variety of functions fostering social interaction. -Recreational: a complex program which could revitalize this portion of the City of Oslo.

LOCATION: In the world

DESCRIPTION: llife is growing. Statistically we will have more then 9 billion human beings on our planet earth in 2050! all these people will need room to live and will use energy in an massive and extraordinary scale. it is time to think out of scale, it is time to develop ideas, to develop concepts to solve these problems and to find a solution for everyone and not at least for the whole planet. in the first phase we will introduce our concept in an abstraction of signs symbols with the aim of reality. in addition it will bring all needs together which are useful for every situation in every circumstance. this is the fusion and interflow that we are proposing and which takes consilience with the goals in futuretime. it can be used in the cities as parasites on top of the roofs, in open places, in demolished structures. on the countryside to complete existing structures or to develop a new colonisation with eco-friendliness. 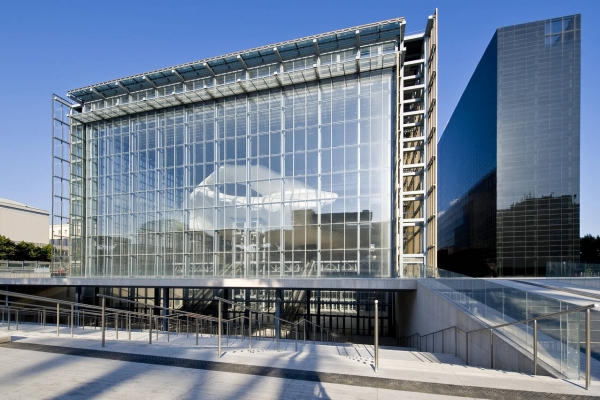 DESCRIPTION: Structures of contemporary high-rise buildings, though often limited by material capacities, dynamic lateral forces, and legal constraints, have recently undergone a renaissance of investigation. The list of known structural types such as moment frames, braced frames, trussed tubes, and shear wall systems has been expanded to include new morphologies and materials including non-metric cellular formations, exoskeletal lattices, and next-generation carbon fiber composite networks.Experimentation in the realm of mechanical systems, however, is far behind. Most high-rise buildings are still outfitted with a hidden and expensive network of metal ducts which are run through structural cores or between structural beams in an ineffectual and often conflictual way. Mechanical systems have become the ‘other' of structure, relegated to dark inaccessible spaces, inevitably remaining architecturally inert. At one moment in recent history, however, architects began turning buildings inside-out for the sake of the expression of HVAC systems. That movement in architecture-- Structural Expressionism-- was nevertheless problematic from the start since projects effectively transported known HVAC systems wholesale to the exterior without any productive transformation in terms of form, organization, or atmosphere.This project revisits the problem of architecturalizing tower infrastructural systems. Rather than expressing the literal image of technology, the goal is to create technological ambience. This ambience is defined by translucency, shrouding, and exotic lighting and color effects. But it is also the result of hybridizing mechanical systems with other building systems in a way that cross-wires traditional hierarchies and produces synergetic forms. The point of departure for the design was to allow ductwork to migrate out of the central core toward the exterior. The glass envelope begins to take on duct behavior by delaminating to create pleats where air can flow. These pleats branch and run across the building facades, linking to floor plenums on each level at several locations along the perimeter.A second layer of loose-fitting skin wraps the glass duct-skin, registering the pleats and shrouding the building. This shroud is made of perforated sheet metal. It acts as a sunscreen during the daytime, while nonetheless allowing views through.At night, the glass ducts glow from behind the shroud, creating elegant color and depth effects, reflections, and silhouettes. Their freeform morphology and variegation begin to create associations with the lush natural terrain of the site.