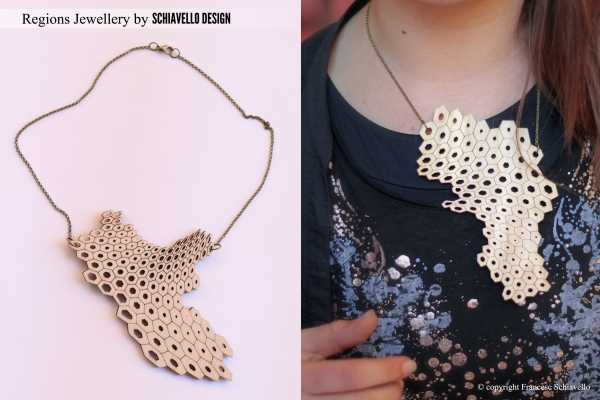 be[e] Italy is a fashiondesign project by Francesco Schiavello of the Schiavello Architects Office (SAO).

A jewelry collection, presented for the first time during the second edition of the Trieste Mini Maker Fair, at the premises of the International Center for Theoretical Physics (ICTP), a research center that works on the basis of an agreement between the Italian Government and two UN Agencies and where studies and researches in physics and mathematics are carried out.

This project is indeed linked to the worlds of physics and mathematics; it also combines biology, these all merged through design.

The goal is creating unique design jewels using model that we can find in nature, starting from the study of natural phenomena and using programs which write codes based on parametric processes. This process emulates biological models of construction, so far indecipherable codes, putting digital manufacturing at the service of architecture and design.

The design of this creations is inspired to forms and geometries which bees are able to create: endless configurations, characterized by the alternation of solids and voids and by the irregular Combination of 110 modules (honeybees parametric). Jewels which are dynamic by their very nature.

On the occasion of the Trieste Mini Maker Fair, SAO has therefore wanted to present a project of innovation and design, while denouncing the widespread bees death. Beyond its aesthetic function design becomes a sensitisation and awareness raising tool.

Monument to the victims of the Mafia 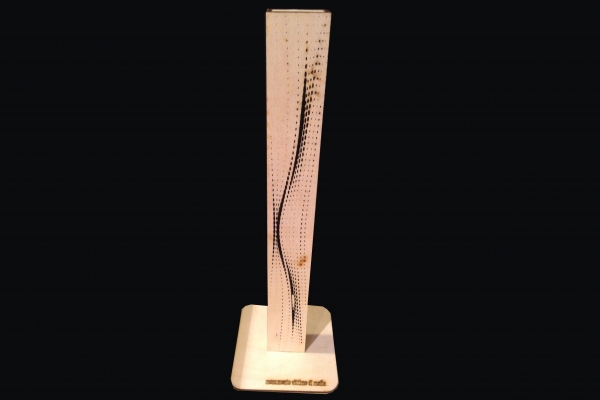 Monument to the victims of the Mafia

PROJECT | Monument to the victims of the Mafia

DESCRIPTION: Turin: the City projected into the Future The city of Turin is not just for the Fiat any more. The city of Giovanni Agnelli has been changing fastly: world capital of book in 2006 and Design world capital in 2008. Turin as a post-olympic city have been trying to find a way to develope the city in aspect of culture. It is a moment for the city to be transforming totally. The main character of Turin is surrounded by nature: Alphs mountain with snow in whole winter. The proposal for roof represents this character of city with the form of nature. To obtain the fluid forms for the roof we generate a new geometry, which is deformed from esagonal geometry. This deformed geometry is also linked into the concept of the volta of Mole Antonelliana that is a simbol of the city of Turin.

DESCRIPTION: Structures of contemporary high-rise buildings, though often limited by material capacities, dynamic lateral forces, and legal constraints, have recently undergone a renaissance of investigation. The list of known structural types such as moment frames, braced frames, trussed tubes, and shear wall systems has been expanded to include new morphologies and materials including non-metric cellular formations, exoskeletal lattices, and next-generation carbon fiber composite networks.Experimentation in the realm of mechanical systems, however, is far behind. Most high-rise buildings are still outfitted with a hidden and expensive network of metal ducts which are run through structural cores or between structural beams in an ineffectual and often conflictual way. Mechanical systems have become the ‘other' of structure, relegated to dark inaccessible spaces, inevitably remaining architecturally inert. At one moment in recent history, however, architects began turning buildings inside-out for the sake of the expression of HVAC systems. That movement in architecture-- Structural Expressionism-- was nevertheless problematic from the start since projects effectively transported known HVAC systems wholesale to the exterior without any productive transformation in terms of form, organization, or atmosphere.This project revisits the problem of architecturalizing tower infrastructural systems. Rather than expressing the literal image of technology, the goal is to create technological ambience. This ambience is defined by translucency, shrouding, and exotic lighting and color effects. But it is also the result of hybridizing mechanical systems with other building systems in a way that cross-wires traditional hierarchies and produces synergetic forms. The point of departure for the design was to allow ductwork to migrate out of the central core toward the exterior. The glass envelope begins to take on duct behavior by delaminating to create pleats where air can flow. These pleats branch and run across the building facades, linking to floor plenums on each level at several locations along the perimeter.A second layer of loose-fitting skin wraps the glass duct-skin, registering the pleats and shrouding the building. This shroud is made of perforated sheet metal. It acts as a sunscreen during the daytime, while nonetheless allowing views through.At night, the glass ducts glow from behind the shroud, creating elegant color and depth effects, reflections, and silhouettes. Their freeform morphology and variegation begin to create associations with the lush natural terrain of the site.